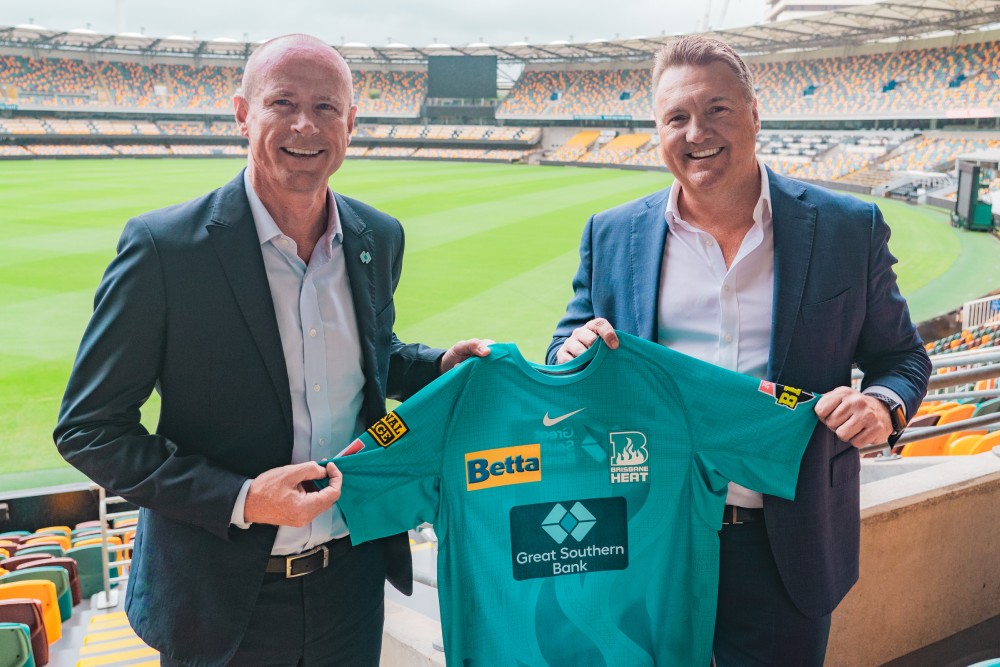 Great Southern Bank has reaffirmed its commitment to Big Bash cricket, extending its successful partnership with Queensland Cricket by signing on as the Brisbane Heat’s Principal Partner for a further two years.

The new agreement, which will run until June 2024, will see the Great Southern Bank name continue to feature prominently on the front of both men’s (BBL) and women’s (WBBL) playing and training shirts as well as on signage at the Gabba and Metricon Stadium.

“We are Australia’s largest customer-owned bank and have been around for 75 years, but our new name is less than six months old and we’re really focused on introducing our brand to people who might not already know us,” Mr Lewis said.

“The Heat’s huge fanbase has a core audience of families and millennials, many of whom are trying to enter the housing market for the first time. This aligns with the audience we are supporting through our purpose of helping all Australians own their own home.

“Having our new name on the Heat’s new shirts gets our brand in front of millions of television viewers nationally, as well as cricket fans attending games. The BBL is the most-watched league in Australia on a per game basis and women’s cricket is now the fastest growing sport in Australia, appealing to a whole new generation of fans.

“The work we’ve put into this partnership since 2016 has been a huge success, helping us grow our brand awareness and attract new customers, not just in Queensland but on a national stage.”

“Queensland Cricket prides itself on establishing lasting relationships with our commercial partners, and the Brisbane Heat’s deep connection to Great Southern Bank is a prime example of how we collaborate successfully,’’ he said.

“The Heat WBBL and BBL teams are among the most watched in the country and we’re delighted and excited to assist Great Southern Bank in their goals of helping Australians own their own homes, while at the same time supporting our vision to grow our game.

“The reach and engagement of our club will give Great Southern Bank exposure to millions of fans across the country over the summer, and we are honoured we can play a role in what is an exciting new phase for their organisation following this year’s brand name change.

“The new agreement with Great Southern Bank will provide a direct benefit to the game in Queensland, helping cricket to grow from Cape York to Coolangatta and all the regions and centres in between.”

“I would like to thank CEO Paul Lewis, CCO Megan Keleher and everyone from Great Southern Bank for their support and trust. Our partnership together has been built off shared values and goals, and we are delighted to see this continue.”

The two-year sponsorship extension will also support Queensland Cricket to continue its grassroots activities and competitions throughout the year, including junior cricket, coaching clinics and regional tours.

For over 75 years, we’ve been putting our customers first, and today we look after the financial and insurance needs of more than 375,000 Australians. We have changed our name from CUA to Great Southern Bank but we remain customer owned and firmly focused on helping all Australians own their own homes.